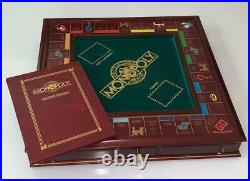 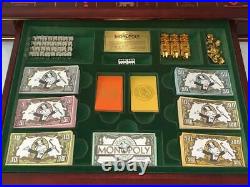 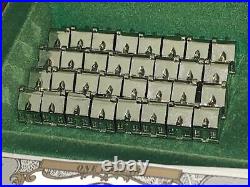 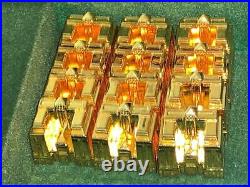 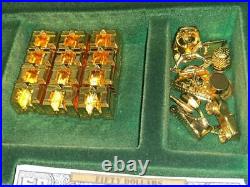 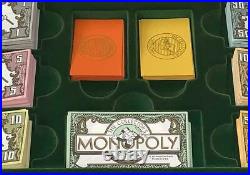 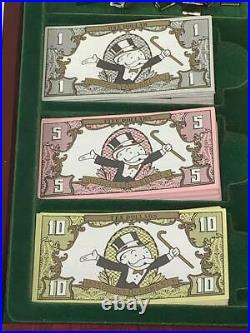 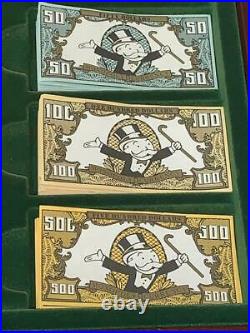 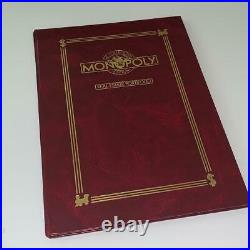 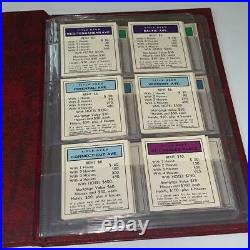 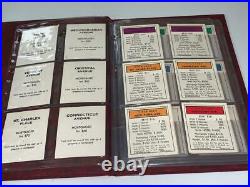 Own a personal item from the estate of beloved Jeopardy! Game show host, Alex Trebek! Clothing, furniture, artwork, books, movies and many personal items acquired during his time as Jeopardy! Host were offered up for sale. This is a wonderful way to own something from the beloved game show host!

This is perhaps one of the most fun items acquired from the Alex Trebek Estate Sale - the family game room's Franklin Mint Monopoly Deluxe Wood Board Game Collector's Edition from 1991! This game was sitting on a table in a small game room with a television entertainment center in Alex Trebek's home (see photo in listing)! Beautiful wood board cabinet measures approx 21" x 21" x 3 high and the cabinet with all the components weigh nearly 18lbs!

Additionally there is a Real Estate Portfolio with all of the property deeds along with original Game Component Checklist. The green felt on top of the game board is clean and you can clearly see that some of the bills have been used did Alex actually play this game? I certainly would like to think so!

The wood cabinet is in overall beautiful condition with only a few minor spots of wear. In this case, wear is good - again, this is from the home of Alex Trebek!

Game will come with a Letter of Provenance issued by Planet of Pop stating that this item was indeed acquired on April 22 (Day 2) of the four day sale from the actual estate of Alex Trebek. Photos of this item were taken the day of the sale at the site of acquisition.

If you've been wanting to own this Deluxe Edition of Monopoly, there is no better what to get than the one that came from the home of one of the most beloved game show hosts ever! See other listings for more personal effects from the estate of Alex Trebek! 100% GUARANTEED FROM THE ESTATE OF ALEX TREBEK - OBTAINED IN-PERSON! About Alex Trebek George Alexander Trebek was a Canadian-American game show host and television personality. He hosted the syndicated general knowledge quiz game show Jeopardy! For 37 seasons from its revival in 1984 until his death in 2020. Trebek also hosted a number of other game shows, including The Wizard of Odds, Double Dare, High Rollers, Battlestars, Classic Concentration, and To Tell the Truth.

He also made appearances, usually as himself, in numerous films and television series. Trebek made multiple guest appearances on other television shows, ranging from Jimmy Kimmel Live!

In 2008 and 2011 to The Colbert Report series-finale. In August 1995 in a return to his broadcast-news roots, Trebek filled in for Charles Gibson for a week on Good Morning America. Trebek was a guest star in season 3 of The X-Files playing one of two "Men in Black" (human agents charged with the supervision of extraterrestrial lifeforms on Earth, hiding their existence from other humans) opposite Jesse Ventura, in the episode "Jose Chung's From Outer Space", which first aired on April 12, 1996. On June 13, 2014, Guinness World Records presented Trebek with the world record for most episodes of a game show hosted, with 6,829 episodes at the time. Trebek also appeared in multiple television commercials.

A native of Canada, Trebek became a naturalized U. He received the Daytime Emmy Award for Outstanding Game Show Host eight times for his work on Jeopardy! Trebek died on November 8, 2020 at age 80, after a 20-month battle with stage IV pancreatic cancer. He had been contracted to host Jeopardy! Franklin Mint Monopoly Deluxe Wood Board Game Coll Ed 1991 Alex Trebek Estate.

George Alexander Trebek was a Canadian-American game show host and television personality. Rebek made multiple guest appearances on other television shows, ranging from. In 2008 and 2011 to. In August 1995 in a return to his broadcast-news roots, Trebek filled in for.

Trebek was a guest star in season 3 of. Playing one of two "Men in Black" (human agents charged with the supervision of extraterrestrial lifeforms on Earth, hiding their existence from other humans) opposite. Jose Chung's From Outer Space. , which first aired on April 12, 1996. Presented Trebek with the world record for most episodes of a game show hosted, with 6,829 episodes at the time.

International Buyers - Please Note. As most of the items we offer are COLLECTIBLE in nature, both modern and vintage, used and new old stock, we make every effort to clearly photograph and accurately describe each and every item we post. We will do our best to address your concerns, answer any questions and provide additional info if necessary.

In the rare instance of an error with your order, we will always be honest, fair and reasonable and only ask that you be honest, fair and reasonable as well. We've been serving the collector community since 1991. We literally have thousands of items in stock and are always getting new, fun and exciting stuff in be sure to check our store often as new items are always being added to our online inventory!

Attention Sellers - Get Templates Image Hosting, Scheduling at Auctiva. This item is in the category "Toys & Hobbies\Games\Board & Traditional Games\Contemporary Manufacture". The seller is "planetofpop" and is located in this country: US.

This item can be shipped worldwide.