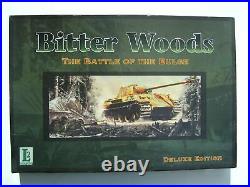 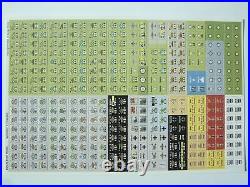 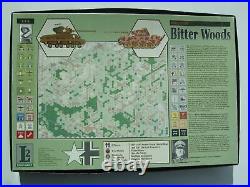 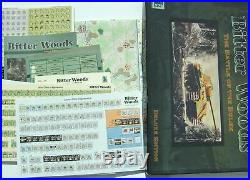 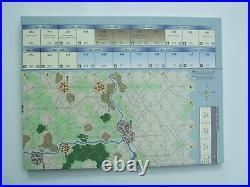 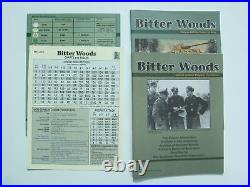 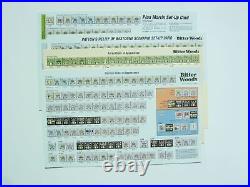 Condition - Excellent, though outer box has slight crush and scuffing. "Bitter Woods is a mid-complexity wargame on the last great German offensive in Dec 1944, commonly known as the "Battle of the Bulge. The map depicts the area of operations, the Ardennes area at the borders of Germany, France, Belgium, and Luxemburg.

Prominent features like roads, rivers and cities are depicted. A hexagonal grid is superimposed over the map to regulate game play. Each hexagon is 2 miles across, unit size is brigade and regiments.

Each turn represents 12 hours of real time. Game features include morale, prominent leaders, blitzkrieg tactics, German army boundaries, initial surprise, Allied air power and much more. This is the Deluxe Edition, an entirely new version (fourth edition) of the game. First off, they've mounted the game-mapboard-(30" by 46") to avoid the problems with paper mapsheets(which also increases the cost of doing such). They have improved & updated the graphics for everything all around, and increased the size of the game counters to 5/8, while that's been factored into the cost as well. Then, they greatly enhanced the current Rulesbook (4th edition) with new scenarios, an additional variant, rules changes & clarifications, included a Players Handbook, updated the designer's notes, and much more! There are full COLOR player aid cards, Random Events are introduced, they've updated the cartography (the map graphics), provided an updated Order of Battle, the hexes have been enlarged to contain the larger game counters, and variant counters are also introduced.

This item is in the category "Toys & Games\Games\Board & Traditional Games\Modern Manufacture". The seller is "thesmalltoycompany" and is located in this country: GB. This item can be shipped to United Kingdom.